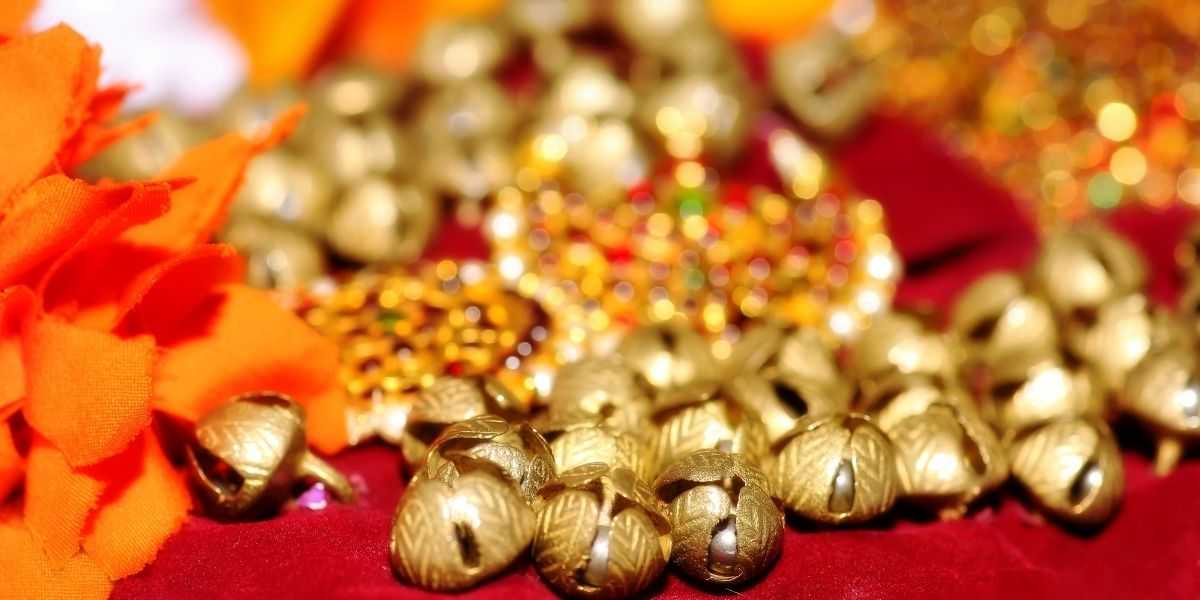 Ghungroos are the absolute base element of Indian classical dance. The use of Ghungroos is not visible in any dance form besides Indian Classical dance. Since ghungroos produce a sound, it also comes under Ghana Vadya. Since the sound obtained from ghungroos help in evoking emotions (Rasa), it adds life to the dance.
The word Ghungroo is relatively new. Ghungroo is initially known as Nupur. The description of Nupur is present in the literary works of Kalidas and Banabhatta. Its usage originated as a stimulus experience to make the expressions more emotional and smooth.
Click To Know More KathakClub Fees Charges
There may not be ample historical evidence, but ancient texts say that folk dancers danced with chickpeas or other plants (which had dried seeds inside) tied to their limbs. The sound of buds playing in the same rhythm with the body speed made it more pleasing. Later, musical instruments developed to fulfill this need.
The literal meaning of Nupur is to fill a void. There is a vacuum inside the Nupur that vibrates with the shape of spring outside and produces a sound. On the other hand, when we hear the sound of Nupur, then this void seems to be filled. Therefore, the meaning has two interpretations. Ghungroo, the word, means hollow. It is a spherical object made of metal that is empty from the inside. On fitting a metal bell-like object inside, it emits a sound by moving inside the ghungroo.
How should a Ghungroo look like
In Abhinaya Darpana, Acharya Nandikeshwar stated that -
Ghunghroo should be made of bronze or brass. They should be neither too big nor too small, their texture crescent, and they must be uniform. All ghungroos should have the same tonality, else ghungroos with different sounds will sound chaotic and untuned. The number of ghungroos for each ankle should be between one hundred to two hundred and fifty. One must always tie their ghungroos in (cloth) rope.
Nowadays, the use of Ghungroo knotted in leather has increased a lot in students. Such use of these ghungroos is convenient in terms of opening and binding. However, the sound interrupts the syllables from emerging.
Acharya Nandikeshwar also wrote that a Ghungroo is tied at the distance of each finger in blue thread. While intertwining the ghungroo in the rope, it should also be kept in mind that the hole in which the rope is threaded should not be equidistant. In this way, the thread between the two knots should be free for movement and adjustment.
Importance of Ghungroos
Ghungroos are significant as their sound helps interpret different footwork patterns. The nuance of Indian classical dance becomes even more pronounced with the beautiful chimes of the Ghunghroo.
While dancing, the ghungroo is effective in balancing the dancer's body, as at least two kilos of weight is added to the legs while doing spins, toda, tukda, etc.
Among all the Indian classical dance styles, Kathak dance showcase extensive utility and significance of Ghungroos.
Click To Know More:-Guru Shishya Parampara

Q. How is a ghungroo made?
Ans. The Ghungroo bells are made of brass. While some markets offer ready-made Ghungroos, you can make Ghungroos at home too! The process may be slightly complicated at first, but once you get used to it, then you’re good to go! To make a Ghungroo you need to check the size of the Ghungroo - it should not be too big or too small. The rope should be of good quality so it can hold your Ghungroos (anklet) together for a long time. You need to measure the rope according to the number of bells you have. For example, if you want to make a ghungroo with 100 bells, then you will need approximately 9-10 meters of rope. Ghungroos are made by creating a loop and knotting them in the ghungroo. There are different ways of knotting the bells together to form an anklet.
Q. How many Ghungroos should there be on one ankle for a beginner?
Ans. If you are a beginner who is new to the concept of Ghungroos, then the number of bells in a Ghungroo to be worn on one anklet depends on your age. For example: for a child, we start with 25 ghungroos on each anklet. Whereas, for an adult, we start with 50 ghungroos on each anklet. However, we advise you to consult a physician before wearing Ghungroos as they are heavy, and wearing Ghungroos on weak legs may cause more wear and tear.
Q. What is the price of a Ghungroo?
Ans. The price of one ghungroo (one bell) ranges from Rupees 7 to 10. The price depends on the size of the bell.
Q. Why are Ghungroos important for Indian classical dancers?
Ans. Indian classical dancers' ghungroos are their instruments. When a dancer performs complex footwork on stage, it is the sound of Ghungroos that allows the audience to appreciate the melody and intricacies that emerge from it. Ghungroos are what give life to the dance of the dancer, and are thus considered sacred to them. This is also why Indian classical dancers always place their Ghungroos in the temples in their classrooms in their Guru’s presence.