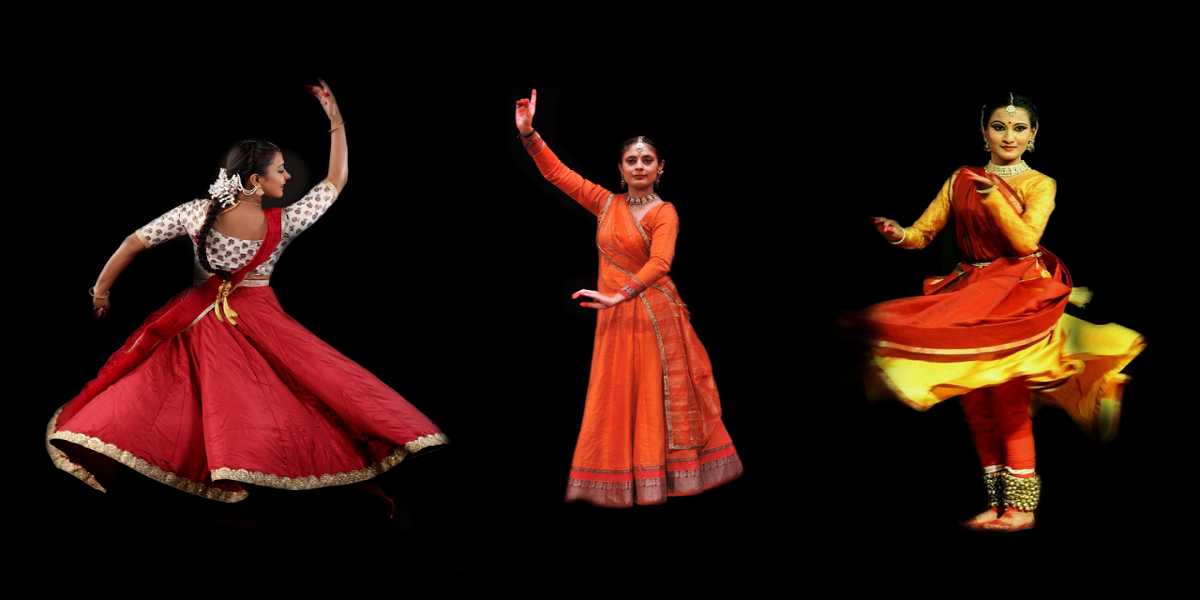 According to scholars, the initial source of gharana originated from the word griha of Sanskrit. The hindi word Ghar was formed from Griha in Sanskrit and the word Gharana evolved from Ghar. A house that has some different type of speciality for its identity is called Gharana.

In each gharana, the mode of foot work and body movements are different.

Raigarh King Raja Chakradhar Singh emerged as a sensitive protector of arts in the early twentieth century. Due to Raja Saheb's deep affection and respect, the best and senior dancers and Gurus of Lucknow, Jaipur and Banaras took shelter together in the Raigarh court. Together they decided different dimensions of artistic creation.There was also a lot of conflict of scholars in the Raigarh court.Kathak Dance From Which State

This dispute arose again in the court of Raja Chakradhar Singh in Raigarh in 1936. Due to the mutual confrontation between Acchan Maharaj and Jayalal Maharaj, this dance clearly gave birth to the Gharanas.

Raja Chakradhar Singh was a well educated man. He understood the needs of the present and future along with the ancient tradition and study of music. After consulting knowledgeable Gurus, he made fixated certain criteria that came under various Gharanas.

According to this, the current four Gharanas of Kathak dance have been accepted.

Describing Shri Ishwari Prasad ji as a native of the Handia region in Prayagraj (Allahabad), he was established as the original founder of the Lucknow Gharana of Kathak dance. Handia is one of the areas whose main inhabitants have been storytellers. It was said that Ishwari Prasad had seen Lord Krishna in his dream and inspired him to make the Nritya Bhagavata.

DYNASTY TRADITION OF THIS GHARANA

Pragas ji had three sons - Durga Prasad, Thakur Prasad and Mansingh. Durga Prasad ji had two sons - Bindadin, and Kalka Prasad; whereas Mansingh had one son Bhairo Prasad. There is no mention about the child of Thakur Prasad ji. Kalka-Bindadins duo became famous all over the country for their dance. Shri Kalka Prasad was married to Shri Mati Jagadei and had three sons - Jagannath Prasad, Baijnath Prasad and Shambhu Nath. All three became great dancers and became famous by the name of Acchan Maharaj, Lachhu Maharaj and Shambhu Maharaj.

Munna Shukla and Shri Om Prakash both gained high recognition in the dance world. Because of being the son of Pandit Birju Maharaj's sisters-in-law, they have a relation of maternal uncle and nephew in them.

Pt. Birju Maharaj, who spent his entire life cultivating and practicing Kathak dance, was a senior guru and director at the Delhi Kathak Kendra. Later in retirement, he is running the Kalashram Institute in Delhi. His elder son Pt. Jai Kishan Maharaj is working as a Guru at the Kathak Kendra.

Lachhu Maharaj, the second son of Shri Kalka Prasad Ji, married Shri Mati Rama Devi, but they have no children. Shambhu Maharaj, the third son of Shri Kalka Prasad married thrice resulting in five children, but Shivmohan and Gangu died an untimely death. Shambhu Maharaj two sons - Krishna Mohan and Ram Mohan are eminent artists and Gurus in the field of Kathak. Shri Krishna Mohan gave his services as a Guru in Kathak Kendra. Krishna Mohan Mishra was married to Vaswati Sen, and Ram Mohan was married to Parul Dani.

* In this, the dancer does small toda and tukdas.

* Special attention is paid to the beauty of hand movements in Tukdas.

* In this Gharana, in addition to the dance lyrics, the Paran (words of Pakhavaj) and Parmelu are also danced although there is little publicity for dancing.

* Many types of Ta Thei Tat Thei are danced in Tukdas of tatkaar.

* They also have their own special way of presenting thaat.

* Gat Nikas is more visible in this gharana, and they have a custom to make Gat from both sides.

* Singing Thumri and telling expressions is the speciality of this Gharana, whose main credit for the promotion goes to Bindadin Maharaj ji.

Several dynasty traditions of Rajasthan have been jointly included under the Jaipur gharana of Kathak dance. The practice of this dance has been going on from generation to generation in Churu district of Rajasthan.

Bhanuji was the first promoter of the Jaipur Gharana who received the education of Tandava Nritya from a saint. His son was Malu ji who imparted his father's dance lessons to his two sons Lalu ji and Kanu ji. Kanuji received training in Natvari dance from Vrindavan as well. His two sons were Gidha ji and Sheja ji. The first one got training in Tandava and the second one got special merit in Lasya ang. Gidha ji had five sons, out of which Shri Dulha ji gained special fame in the field of dance. He had equal rights over Tandava and Lasya and settled in Jaipur. They had two sons, Shri Hari Prasad and Hanuman Prasad. Both of them were proficient in choreography and were employed in Gunijan khana of Jaipur.

At the time when the pair of Kalka-Bindadin was becoming famous in Lucknow, at the same time, the pair of these two brothers in Jaipur was known as Dev-Pari. Hanuman Prasad Ji had 3 sons: Shri Mohanlal, Chiranjilal and Narayan Prasad. Shri Narayan Prasad is the representative dancer of this era. His two sons Sri Charan Girdhar and Tej Prakash were absorbed in the practice of dance according to their ancestral tradition. Many relatives of Hari Prasad Hanuman Prasad were also dancers like Shyam Lal, Chunnilal, Durga Prasad, Govardhan Ji etc.

There are many branches of Jaipur Gharana, out of which two sons of Chunnilal, Shri Jai Lal ,Shri Sundar Prasad ji have gained special fame. Apart from their families, these two brothers also received dance education from Bindadin Maharaj ji of Lucknow. Jai Lal ji had 1 son Shri Ram Gopal who lived in Kolkata and imparted the education of dance.

Jay Lal ji daughter Jayakumari also earned a special reputation in the field of Kathak dance. Pandit Kundan Lal and Pandit Sundarlal Gangani, who are closely related to Pandit Narayan Prasad ji, also earned a good reputation in the Kathak field. The elder of these two brothers Guru Kaundanlal Gangani ji was a senior guru at the Kathak Kendra in Delhi.

* In this, the dance starts with Ganesh Vandana, Shiva Vandana or Durga Stuti.

* Jaipur Gharana has a predominance of layakaari.

* These people pay special attention to cleanliness of footwork.

* Different types of literature like the pakshi paran, jaati based paran etc. is the speciality of this gharana.

* There is sattvikta in the performance of the expressions and in abhinaya paksha expressions are shown in bhajan, thumri, and pada.

The third Gharana of Kathak dance is popularly known as Banaras Gharana or Janaki Prasad Gharana. Janaki Prasad was a resident of Varanasi and the brother of the famous tabla player Pandit Ram Sahay Ji.

During his time Shri Hukum Ram Ji came to Varanasi with his son Chunnilal. Chunnilal used to do some folk dances as a girl. Seeing his talent, Janaki Prasad kept him with himself and duly imparted the knowledge of Kathak dance for 15 years. On returning from Banaras, Chunnilal was appointed to the Bikaner court and imparted dance education to his younger brother Dulha Ramji.

Shri Krishna Kumar, son of Pandit Gopal ji, who recently passed away, was living in Delhi and was representing his Gharana.He also received dance training from Shri Shambhu Maharaj of Lucknow.

Janki Prasad Gharana is based on the lyrics of the pure dance, Sattvik bhav and tatkaar.

In this, special attention is given to the lyrics, and intricate footwork. Tigda dig dig is a syllable with 4 syllables, however these people create 6 syllables.  In footwork, the heel is used more in this gharana.

Tode,tukde is very rare. However, it is very difficult to add them properly with limbs and legs. The correct Gat is also heard in this gharana. The purity of the expressions in this gharana is also very much taken care of.

In keeping with the image of independent India, Kathak incorporates the merits of its diverse family in Raigarh. Raja Saheb could clearly see the truth that in the coming times, a well rounded dance structure will be able to make its place in the society. With this vision, he began to carve and shape this dance in his court.

Therefore, in this gharana, where one side we see the aspect of the difficult taalang, on the other side, there is also a sense of finesse and elegance.

Kathak of Raigarh gharana has emerged in front of us as a strong classical dance in the present scenario.

DANCE OF THIS GHARANA

* The work of ati vilambit is carried out in teen taal. There is a trend to perform teen taal in 64 beats.

* In this gharana, the full footwork along with going from 8 to 16 guns is prominent.

In today's young dancers, there is an urge for Gharana centric education: but they do not like to be tied into any one Gharana.Today education has spread, educated students emphasize on learning and innovative use of the characteristics of each Gharana.

Q. What is a 'Gharana'?
Ans. A Gharana can be best understood as an ideology that has existed for generations. The word Gharana comes from the Sanskrit word Griha which means home. In this context, a Gharana is home to a school of thought.
Q. How can I join a Gharana?
Ans. Joining a gharana entirely depends on what your Guru/teacher learnt during their training period. The base for Kathak is the same, irrespective of the gharana. The features of the Gharana are only touched upon during the later years of training.
Q. How many Gharanas are there in Kathak?
Ans. As of today, there are four main Gharanas in Kathak. These are - Lucknow, Jaipur, Benaras and Raigarh gharanas. Every Gharana in Kathak is characterised by some salient features of their own.